Greenzi 2020
A novelette of environMENTAL horror.
By Paul G.H. Merrifield
“In a world prepared for unstoppable global warming instead of a sudden mini ice age, a holocausting Echo-Dictatorship born of a global economic depression battles against what remains of the heroic forces of Freedom. “
“Promising to save the planet from hot weather was the excuse the controlling Greenzis needed to maintain what was left of wealth. At first they cleaned the wealthy parts of town, gassing their inhabitants in their own homes and then dumping their lifeless corps like rag dolls into awaiting bio-fueled waste packers parked at the curb. A convoy of body packers then fed the waste to energy incinerator, providing what little energy the dwindling populous was allowed to consume. Minus 60 degrees put an end to that quick.” 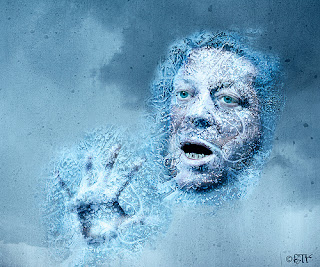 In Landon N.Y. the year is 2020 and one year into what is turning into a “Road Warrior” Depression of local and nationwide pain under a murderous fascist Greenzi regime. A Greenzi regime that kills anyone left with wealth and waste, not just Jews. And worst of all, a mini ice age has compounded the suffering into a full Armageddon for the civilized world. This is a world where pain is measured on a new scale and what these shocked dollar store consumers of comfort are now experiencing can't fully be comprehended. This is the story of a brave family of three who were the rare ones, the ones prepared for the coming of a low tech world where survival is measured in flint lighters, crystal radios, siphon tubes, wood stoves, knives and a loaded gun. 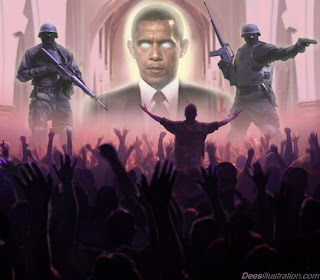 At first they just came for the light bulbs and I did not speak out.

Because these days, I like to hide out in the darkness of my nice WARM basement.

Then they came for the plastic bags and I did not speak out.

Because I was already using the replacement bag they had issued me as per the "minimum consumption laws" and made of 100% Polyester (imitation weave no less).

Then they came with this giant, tandem diesel powered monster of a truck to pickup and compost my bagged leaves and I did not speak out because I didn't have any freakin leaf bags.

So they issued me their new paper bags with 100% of the 30% portion being recycled paper, or a 70% loss in real trees.

Then they came for my oil and I did not speak out.

Because they had already confiscated my Smartcar and recycled it into a wheelbarrow that they forced me to use every Earth Day to help them discover new sites to plant more and more and more trees.

Then they came for the BBQ and I did not speak out.

Because it doesn't matter what the F * & K you do to a vegetarian hot-dog, it still tastes like $ hit.

Then they came for the air conditioner and I did not speak out.

Because by this time, the inevitable cool climate trend had cycled in once again as it has for billions of eons all by it's poor little self, for reasons we do not and may not ever understand.

Then they came to register me to vote, and I did not speak out.

So they impaled my poor little weed infested, pesticide free front lawn with one of their plastic Green Party re-election signs.

Finally they came for me and I COULD not speak out.

Because there was nothing left to give, or take. 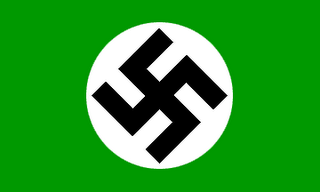 It was the rare sound of snoring that woke me up this time, instead of the usual crying, coughing and whimpering. This snoring that insisted on disrupting our suffering wasn’t from anyone in my family as my daughter and wife clung to me under these clouds of stiff woolly blankets. Our bulging heads, wrapped for warmth, rested on each other like the last three grapes on the vine. I distract myself from this anguish by trying to amuse my sleepless brain with whatever warped crap that goes through it in this world turned so merciless. I thought of how foreign the idea of what we used to call “empty nesters” was now, compared to this fog of communal pain. Not even what’s left of the middle class are empty in their own nests, as their new permanent guests are the kids again, other family and friends and the occasional “rescued” outsider added to the mix. I gaze past my family at our painful reality and I see a subzero concentration camp world, only a camp with lots of frozen canned food to gratefully suck on. Yes, it’s pathetic but at least I’m still alive and most importantly, so is my family. At least we can be thankful for something.

We manage by living, (if you can call it that), in a honeycomb of pitiful refuge houses, where you can see your breath in the living room with thick ice on the windows. In this room you can smell a cold yet still pungent stench of body odor that freezes to your nostril hairs, and then lingers all over again later when it thaws a bit. Shelter itself isn’t the problem for the people. Safe shelter is the problem for the decimated masses, of former soft-bellied, low interest shopaholics. We were stunned first by the utter cruelty of a murderous mob of Greenzi thugs in a second world-wide depression. Now the planet was truly dying but not from out of control warming. That would have been a merciful death. Those not prepared died relatively quickly from the minus 60 degree temperatures compared to us, so far. They went in a few months or so I‘d say, judging by their now silent cries off in the distance downtown. At times we envy these poor souls who most certainly all died speedy yet terror filled deaths.

Canyons of abandoned and burned out malls, strip-malls, car dealers, big box stores and warehouses scar the cityscape like 3rd degree burns on a fresh corpse. Most of the strip malls have been all but raped of useful building materials and what burnable materials that could be peeled like flesh from the remaining naked bones of the girders. Burning meant warmth, and warmth meant living or not living. For worsening the pain in all of this wasn’t another 1930’s sun baked dust bowl. Our particular hell after surviving mass exterminations at the hands of the Greenzis is the inevitable return of a sidewalk cracking and herd thinning cold climate, with icy temperatures not seen by any of us still alive. Was it an ice age? We are not sure yet. All we can do is wait and see. The killer cold nights have passed it seems, thus leaving us with pieces of hope to chew on in faint optimism. We will get through this and while we may not have our lives back, we can start new ones. What choice do we have? Yes, for the very first time in history, it is NOT as bad as “they” said it was going to be. No, it’s not. It’s much, much worse. 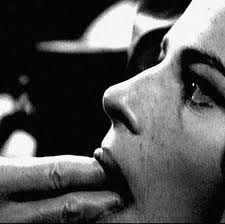 In the sweltering heat of the black-top parking lot, Derek Brown gazed in amusement through his SUV’s windshield to the two boys in front of the Lucky Buck Dollar Store. Aged about eight or nine he guessed. The two swashbuckling lads spared with each other, brandishing their plastic dollar store pirate’s swords, complete with candy cigars dangling from their grinning lips. It’s amazing Derek thought, of how two dollars can go so far these days. And he was almost sure these were the same two boys that wouldn’t shovel his driveway one day last winter for anything less than ten bucks, each!

“Christ!”, he said to himself. Kids now days feel entitled to allowance level wages for shoveling someone else's driveway. He wouldn't be surprised if his own daughter of 12 thought a line of credit was an allowance, only from a bank instead of the parents.

Just then, Jennifer Brown stopped dead in her tracks with her forearm on the dollar store’s exit door, staring at her husband through the store glass with worlds colliding in her mind.

“Did you forget something mom?”, her daughter Amy mumbled, almost stubbing her toe on Jennifer’s heals.

In a déjà vu so powerful it felt as if someone was squeezing the sides of her head, Jennifer recalled the countless times she had left this very same store, rejoicing in the rush of another transaction, another purchase, another bargain. A few dollars spent on two packs of T-Lights reduced for sale didn’t bother her so much this time, as she would always toss the “roaches” as she called them into a nearby dumpster like an addicts spent needle. With more expensive items, usually clothing, she would spare them the fate of the dumpster for that of a drop off donation to the Salvation Army store. But just like penny poker and methadone, it fed the beastly habit. But that beast had been beaten just last year into submission and thankfully in the past. Chalk up compulsive shopping on her list of demons she had beaten in her 32 years.

Life had been a struggle for sure, just like everyone else but who’s suffering is worse than one’s own? Anybody could make that claim and riding herself of learned helplessness had made her stronger in facing her childhood battles with her mother. Add to the list the void left by her distant father. At least she had grown and evolved from life’s challenges, not like her shallow and still pompous sister Glenda who had grown up with their father. He was an emotionally awkward man who showered his one daughter with endless material wealth, from toys to concert tickets but short changed poor Glenda on affection. Being a generous giver of anything certainly did not describe Jennifer’s mother who had spent a lifetime living on envy, jealousy and consequently, a lifetime of debt. That struggle was a wound that had cut deep and left shopping, a type a hoarding disorder, just the thing to stop the emotional bleeding.

Before pushing the door open to the asphalt oven outside, Jennifer paused with reflection, turned to her daughter, gently stroked Amy’s blond hair off her youthful face and asked.” Let’s see if dad will take us through the drive-thru for a cold chocolate Iceslop?”

“Kay”, was Amy’s less than enthusiastic response. Shopping was ok Amy thought but she’d rather do it online. Did her parents even know what century this was? Her dad when driving had the bad habit of repeating the same jokes over and over again so she was prepared for the worst as they entered the drive-thru. Yes, pretending to give your donut order to the garbage can instead of the ordering kiosk in a drive-thru was funny the first few hundred times.
Check Back Every Week For More Of This Long Tale Of EnviornMental Horror.
Posted by mememine69 at 2:59 PM No comments: Links to this post

Greenzi 2011, a novel of environMENTAL horror 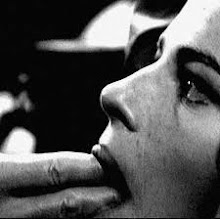 Greenzi 2011, a novel of environMENTAL horror